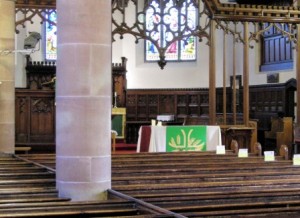 The architects were the Birmingham firm of Bateman and Corser and the church we now know so well was designed in the popular Victorian Gothic style of the day.

Records and rumours of those times are said to recall some reluctance on the part of Tettenhall parishioners to help raise the money necessary for the building of Christ Church! Fortunately, funds were forthcoming and the foundation stone, which can be seen on the north drive near the war memorial, was laid on 1st May 1865. seventeen months later, the completed church was consecrated on 29th September 1866, the feast of St Michael and All Angels. 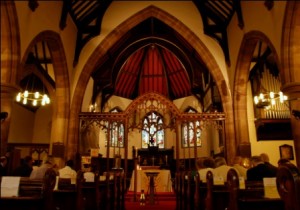 Nicholas Pevsner, in the Staffordshire volume of his Buildings of England, describes the architectural features of Christ Church as being “Rock-faced with cross gables” and having a “polygonal apse, geometrical tracery and wide nave” with some stained glass by CE Kempe. Kempe was a celebrated artist in stained glass of the pre-Raphaelite tradition. He signed his work with a symbol of a castle set in a sheaf of corn and his two windows at Christ Church can be seen at the top of the north aisle. (Other local examples of Kempe’s work can be seen at Wightwick Manor.)

Although outwardly, Christ Church has changed little in its 144 year history, successive generations of Christians have greatly improved and beautified the interior, while at the same time, keeping the dignity and spaciousness which is one of its chief delights. A stroll around the church today will reveal many memorials to local families of yesteryear who lived in the “big houses” of the area. Recent improvements to heating and lighting have greatly added to the comfort of present-day worshippers! 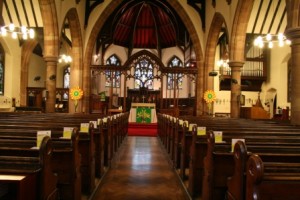 An extension at the west end of the church was added in the mid-1970s and built with the proceeds from the sale of the church hall which stood on The Holloway. By the late 1960s it had become clear that this hall had outlived its usefulness and its sale enabled a convenient set of rooms to be built onto the church, ideal for group meetings and smaller social events.  By the 21st Century, this extension had become outdated and has now been replaced by a larger meeting room, kitchen and modern toilet facilities.

Rectors of the parish have discovered what locals already know—that Tettenhall Wood is a very pleasant part of God’s vineyard in which to live and work and in the parish’s 144 years there have only been nine incumbents.

The last sixty years have seen great changes in the area and the Church’s response to the enormous residential developments which have taken place has been the building of the Church of the Good Shepherd at Castlecroft in the 1950s and, together with the Tettenhall Wood United Reformed Church,  the sponsoring of the ecumenical Church at Perton in the 1980s. Together, they form the team ministry of Tettenhall Wood, working together to the glory of God in the service of His people in the parish.